There it is, down there in the middle by the big white tent.

I’m back from my first ever overseas adventure, and it was a thrilling and enriching one.  The English countryside, London, Stockholm, and the Swedish countryside.  Almost a week after my return, my head is still spinning with all I saw and all of the people I met.  I want to share a bit of my experience in England in this post, then I’ll move on to Sweden in the next. 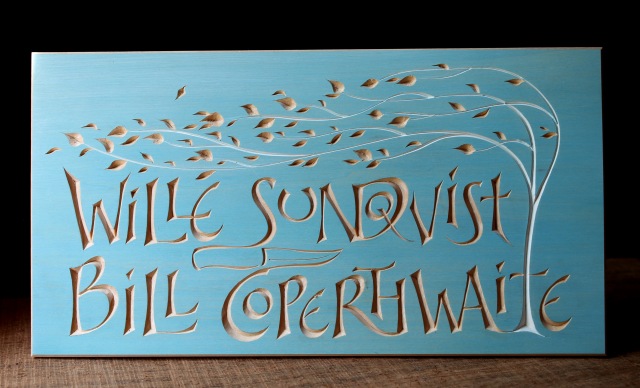 I’ll begin with a heartfelt thank you to Jögge Sundqvist and Peter Lamb for the 2018 Wille Sundqvist and Bill Coperthwaite Slöjd Fellowship.  That went a long way toward making this trip possible for me, a trip that allowed me to meet and share ideas with an international group of craftspersons.  I carved and took along this sign for Jögge and Peter as a small token of my appreciation.

So, again, we’ll focus on England in this post.  These photos may give you some sense of what you’ll experience if you get a chance to go next year or one of these years.

First, you’ll be greeted in Edale at Spoonfest by fascinating, friendly people like Barn the Spoon and Robin Wood, who, along with a host of busy and helpful volunteers, make the magic happen.  That’s Barn in the photo above, just back from the mall it seems and excited about the bargains he found.  Actually, he was punching his truck — really.

I think that’s Harry and his son clearing odd bits of wood from the site.  There are piles of branches of various species for folks to choose from, including lots of crooks! 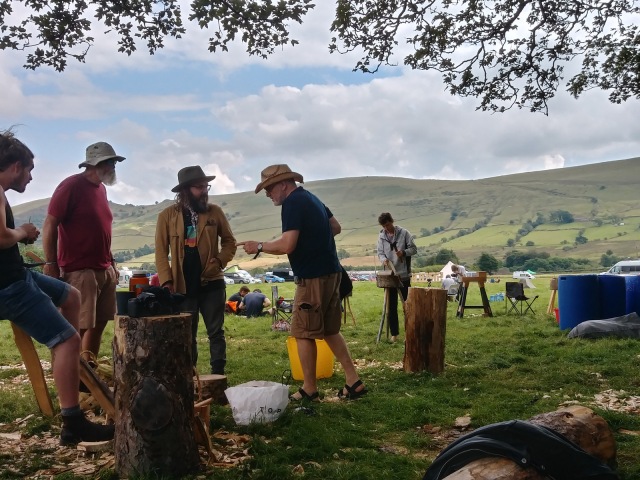 There was plenty of time to share ideas about carving, sharpening, the meaning of life, and, looks like, dance moves.

Some carvers from Cornwall even explained to me the proper way to apply jam and clotted cream to a scone.  There was much unexpected passion raised over this subject, especially when a Devon man spoke up.  I learned many things in England, about spoon carving and beyond.

Lots of contented carving under the trees and tents.

I noticed that folks like to queue in England, even when they’re just carving.  Actually this is the beginning of the early morning line to sign up for that day’s workshops.  Steve has the pole position for a line that would stretch far back through the field.  You’ve never seen happier people in a queue.  People in the workshops were enthusiastic and wonderful.  Thanks to all of you who attended my workshops, demos, and talk. 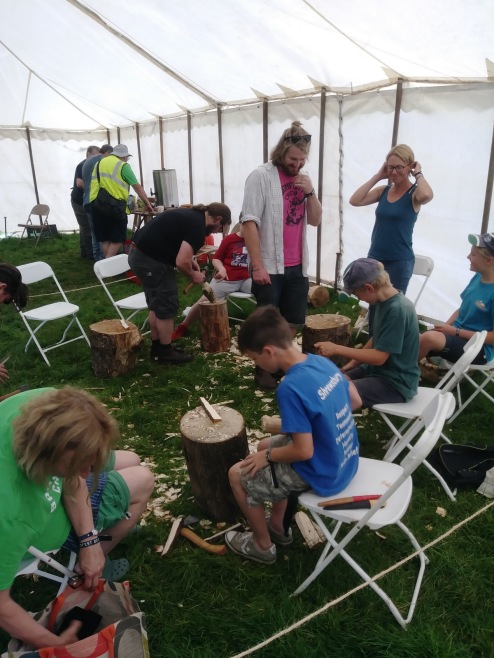 In addition to workshops, demonstrations, lectures, and exhibits, there are programs for the kids at Spoonfest that teach them safe tool skills and fun projects.

In the barn there are things for sale.  Tools, books, and spoons — hundreds of spoons.  I can’t believe this was the only shot I took of a spoon table.  I was often so taken in by things that I neglected to take photos.  Therefore, I have no shots of the musicians, the barn dance, the food, nor many other things.  But I did get a photo of a cool rock:

There’s a whole portion of a barn dedicated to sharpening.  Sean Hellman was kind enough to educate me about many natural sharpening stones, including this lovely Moughton Hole whetstone.  He even gave me a small one to take home.

There was a beautiful and moving exhibit set up inside those doors, a blend of photography and words sharing the inspiring stories of many individuals and how spoon carving has impacted their lives deeply.  If you’ve experienced the meditative and therapeutic effects of  carving, this exhibit made it clear that you are not alone. 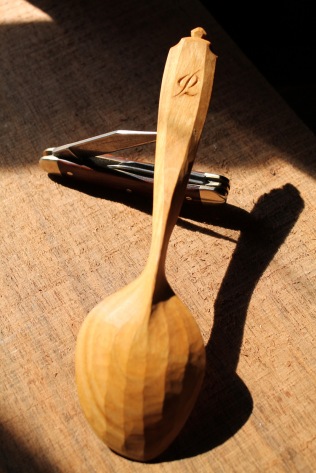 I picked up this lovely spoon for my daughter, made by Lars Laursen, a Danish craftsman who began his woodworking with an apprenticeship with Wille Sundqvist.  Lars shared many stories about his special time with Wille.

When you look up from your spoon or take a walk with a friend, you can’t miss what a beautiful place you’re in.  Edale, in the Peak District, is unlike anything I had ever seen. 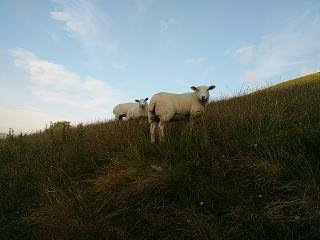 A hike into the hills surrounding Edale takes you along dry laid stone walls, through pastures dotted with sheep. 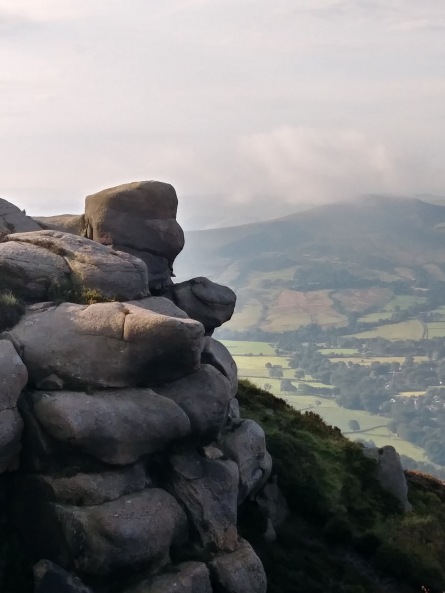 Within an hour, you’re far above the village, treated to breathtaking views.

That’s my son, Noah, up there.

You can sense the thick layer of peat under your feet.  The water has percolated through it before tumbling over the rocks, making a cold-brewed peat tea.

I had always heard about the heather on the hills in songs and poetry, and there it was all around me. 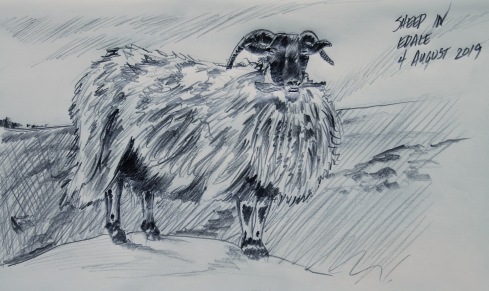 And there was a proud ram up on the ridge beside the trail.  And would you believe he was holding a spoon? 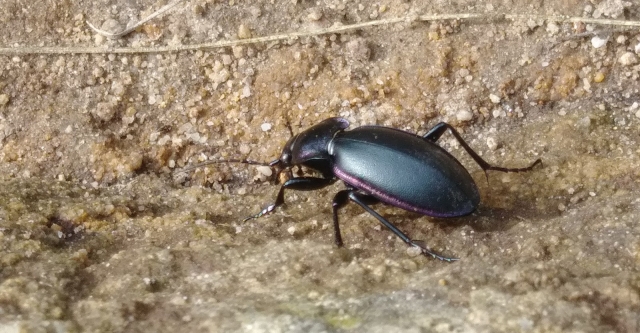 There were smaller creatures too, like this violet ground beetle.

And when you come back down from the hills into the village a pint is waiting for you at The Old Nags Head.

After Spoonfest, we had some time to visit London briefly before heading to Sweden.  Here are a few photos:

A limewood (basswood) sculpture at the Victoria and Albert Museum.  Notice the hollowed out back, probably to encourage drying with minimal cracking.

A close-up of some of the gouge work on the armor. 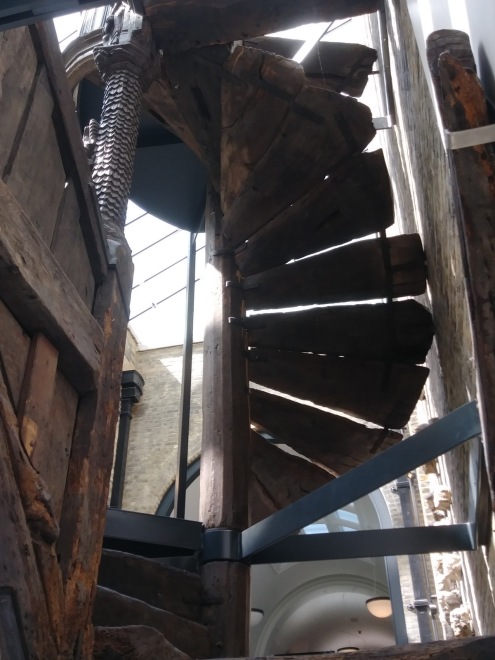 A spiral staircase of wood from a medieval villa. 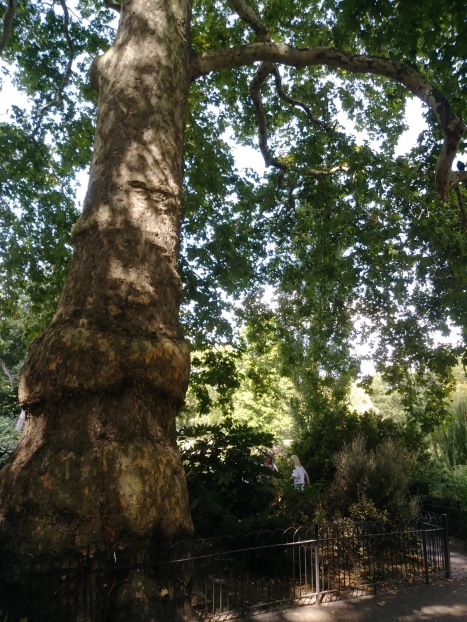 Enormous London Plane (A hybrid of American Sycamore) trees in a park.

Police dogs are relaxed in London.

Of course, there was one amazing building after another.

I had heard about Ben Wilson, and there he was.  The Millenium Bridge, a footbridge across the Thames, has a pattern of small raised metal bars to encourage traction and drainage.  Chewing gum gets pushed down into the recesses between these bars, and this creative fellow has taken to use the gum as canvases for his miniature works of art.  Now there’s lemons into lemonade.  You can learn more about Ben and his painting here.

Hyde Park was a wonderful place to walk, and we walked upon a sculpture by Henry Moore titled The Arch.

The piece is dynamic, changing appearances with your viewpoint as you walk.

As we left for the airport via a train at Paddington Station, there was still some inspiration: 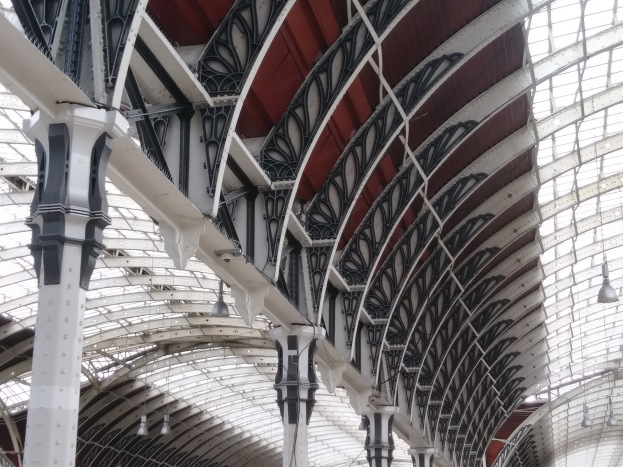