On Flutes and Aging 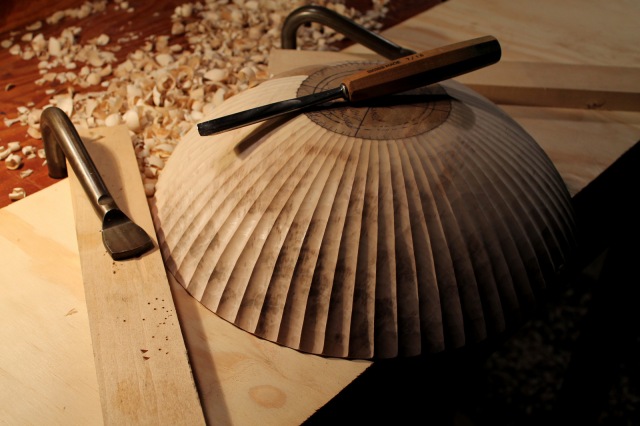 I don’t know much about cheese or scotch, but I’ve heard they can improve if you just let them sit around awhile.  The same might be said for wood sometimes.  This maple bowl underway is from a log that hung around in my shop longer than planned, sealed in a plastic bag.  By the time I got to it, it had developed some nice coloration — early spalting of a sort, I guess.  So, if you’d like to promote character development in maple, try procrastinating. Just don’t wait too long or you’ll have mushy maple. 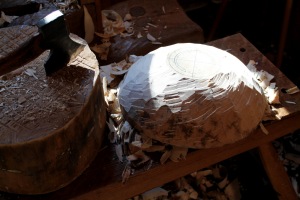 The bowl during hewing.

I carved a round bowl from this piece, then carved flutes around the exterior surface.  The fluting itself came after hewing the exterior with an axe, then refining with a spokeshave.  To maintain some consistency in the fluting, I paced around the bottom perimeter and the top perimeter with dividers until I arrived at the same number of divisions around each circle. Lines connecting the marks indicate the arrises between the flutes.

Each flute is carved from the base of the bowl to the rim.  My set up for this can be seen in the photo.  The boards and the holdfasts form a sort of funnel to keep the bowl from sliding forward, but still allow the bowl to be rotated freely as the carving proceeds from flute to flute.  The plywood piece just serves to protect the benchtop as the gouge plunges downward at the end of the flute.

I still have some carving to do on this piece, then I should have some more photos to share sometime.

12 Responses to On Flutes and Aging