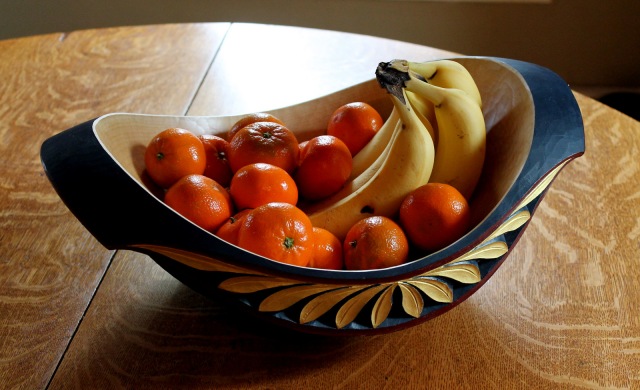 Several weeks ago, I wrote a post about carving the side panels of this maple bowl.  Since then, I’ve completed the painting — a slow process.  Not just because artist’s oils dry slowly, but more so because I did a lot of thinking about and experimenting with the color scheme.  Normally, in carving, my considerations involve line, light, and shadow.  Color throws a whole other factor into the mix, and it can be intimidating.  I was really pleased with the form of the bowl; especially the deeply sculpted curves.  I didn’t want to take a chance and ruin it, but the relatively plain maple seemed to call out for a little more, a little risk.  I won’t be going wild with a paintbrush on all my stuff, but I’m glad I did on this one. 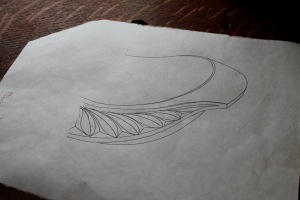 I made copies of this sketch in order to sample color combinations.

To experiment with different color combinations, I drew a basic sketch of a portion of the bowl, then made several xerox copies.  I used colored pencils at first, then  painted sample sections directly onto the paper.  I used lots of paper, but finally decided on what you see above.  Once that was settled it was time to paint the bowl itself. 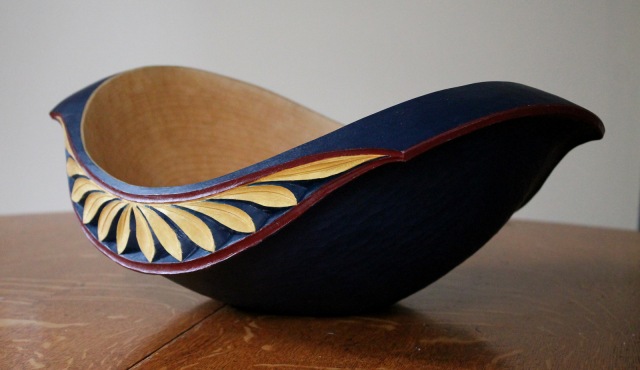 I used high quality artist’s oil paints and thinned them with a little linseed oil to a consistency that wasn’t too thick or too thin.  Jogge Sundquist uses artist’s oils on most of his work, and is an expert in their use.  Over the summer I talked with him about the amount of oil to add, and he explained that there is no rule — “Until it is just right.” It even varies among colors and pigment types.   You can also add thinner (turps or even citrus thinner) instead of oil to create more of a stain.  Anyway, it is fun stuff to mess around with.  I don’t know if it is just right, but I like it. 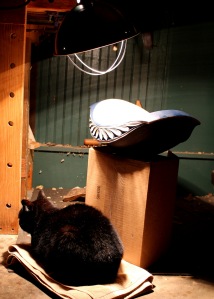 Compared to the paints most of us are used to, artist’s oils take a long time to dry — it can be over a week to be dry to the touch!  Since I painted the colors in sequence after each dried, I sped up the drying process with a heat lamp — which our cat, Mavis, appreciated as well.  After the painting was completely finished, I treated the interior of the bowl with a few coats of flax seed oil, then another over the entire bowl, paint and all. 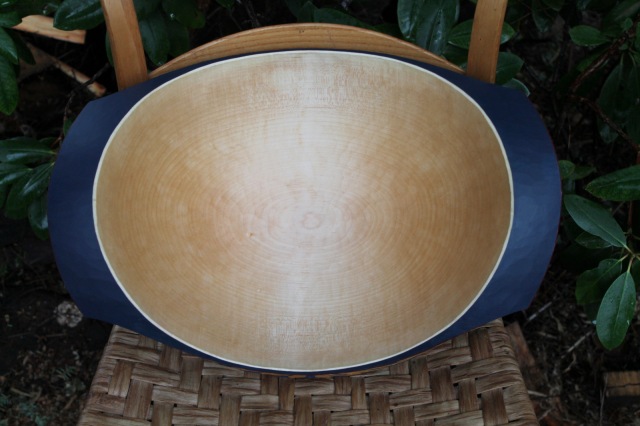